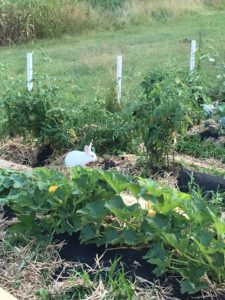 See this rabbit? It’s no ordinary rabbit. I’ll tell you why.

Despite coming from a brood of ten bunnies born from our female’s last mating, this one is special: He loves freedom.

In that department, he leaves the other 9 rabbits in his wake. We can’t keep him in the pen. In fact, there are several white bunnies in this last batch and we weren’t sure if it was the same guy escaping all the time so we marked him. Big black magic marker stripe on its forehead. It’s always him.

It’s worn off now so tonight I marked him with blue. That was after I caught him in my garden. He ate half a tomato and devastated a whole cabbage plant, left a stub growing out of the ground. I have lots of cabbage this year so he chose well.

It took all three of us to catch him by cornering him in the garden. Missus lets the chickens in there to control the grasshoppers and had left the wire gate open. He ran full on towards it to escape but Charlie had it closed and was standing guard. He bounced off it like a trampoline and sat there stunned just long enough for missus to grab him.

This little guy will find the one little part of the pen where he can wiggle under or through something and fuck off. None of the other’s follow him. Not a one. And it’s a male, assuredly. Missus confirmed it.

He’s the great escape artist, can’t be jailed. No prison can hold him. He’s like El Chapo in the early years.

We’ve even had to leave him out a few nights on his own.

Couldn’t catch the little sucker. Despite being out there at dusk being eaten alive by mosquitoes and deer flies chasing the little prick with a salmon net, no way. He knows to either head into the culvert near the pond, a bush with several entrances, or get lost in the wood pile on the other side of the male rabbit pen. Finally, missus calls it off and says “leave him to the foxes and owls.”

But next day, we’ll spot him in the middle of the backyard grazing on the delicious green clover overtaking the lawn. Because that’s what he’s doing. He’s escaping to eat the better stuff found on the outside at the height of summer.

Another thing. Sometimes he breaks into the boys pen and hangs out with his dad and older brother. We’ll see him in there just snuggling up with pops, eating their food or munching down on the fresh green weeds I bring every day.

He’ll visit a while and then screw off from there. They have two inch mesh and can’t follow him. He is small enough still so can slip in and out all he likes. To them he’s a ghost, appearing and disappearing at will.

Missus has taken to putting him in his own cage within the wired pen where the mama rabbit and little ones are being reared. Tonight she said, “let’s just butcher this one right now and eat him.” I like when she shows some of that inner cave woman. Always makes me give her a second look.

But I’m not so sure. For one thing, he’s still pretty small. So he wouldn’t make for much of a meal. He’s also not very fat, probably due to all the exercise he gets running away from us.

Mostly, he makes me think of the difference between conformity and dissent. If I keep him to breed, will I have a backyard full of escape artists to contend with? Or will I be selecting for better genes and a more food resourceful animal?

Truth is, I’ve developed a grudging respect for him.

How can I not like a creature who finds a way to live his freedom? Talk about perseverance. No matter what obstacle is before him, this little guy never gives up. Even after a few days being confined to barracks in his special enclosure, he’s right back at it. To tell you an even nuttier truth: I’m more than a bit inspired by the little fella.

Oh sure, call him wascally. But so what? I lived outside the norms for a long time. It’s a wonder I wasn’t stewed myself.

What is true is that this little guy is a dissenter. Contrary to popular opinion, we should invite dissent into our lives and discussions as much as we can. I’m not talking about bullshit ploys like Devil’s Advocate, a faux-exercise in pretend-dissent.

No. We should take positions and run with them because even if we are wrong, everyone’s thinking around us is enriched because of it. Divergent thinking is where the best answers come from, not from group think, nor especiallly from echo chambers of one person’s thoughts.

This little white rabbit with the now blue streaks on his head will teach us how to build better pens at the least. He’ll teach us all about where a rabbit goes if it escapes. He’s still teaching us the best way to catch an errant rabbit. He’s also showing us what he prefers to eat.

Thirteen rabbits in my backyard and it’s this one, the pain in the ass one, from whom we are learning.

What a wonderful lesson for life.