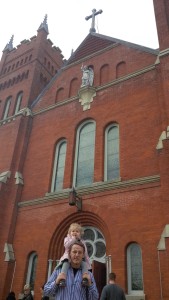 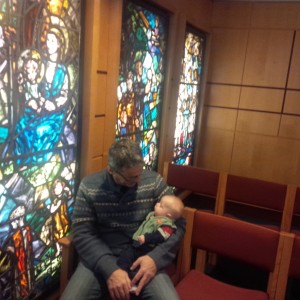 More than once over the years, I’ve read that about half of people are hard-wired to believe in a power greater than them. It’s less to do with ignorance or enlightenment; it’s just how some of us are made. Likely, another quarter in number believe out of cultural or familial loyalty. Most people believe in something, for even non-belief is a belief.  Confronting lifespan is a task for humans. Facing our own end of life while still living is our existential dilemma. Having a faith brings comfort to people all around the world. Religion is another story. The two are often mixed up as one and the same. They’re not at all. The Bible is widely understood to be a metaphor. We like stories; it’s how we understand things. I suppose I am what Huxley called an agnostic, preferring to leave things unknown absent knowing for sure. However, I occasionally attend services. I go because ritual is generally good for us. I also like the beautiful architecture of my Catholic church. The priest there, an Argentinian with a heavy accent, is funny as hell to listen to as he promulgates church doctrine to the faithful… and to others like me. Forgive the reference to hell.  Contemplating the history of my clan and its long allegiance to Rome is something I do often while going through the ancient rites of mass. The people there are like any other, well-intentioned and faulted, and usually dressed decently on Sunday and behaving well. So I like the community. It’s a chance to meet folks I don’t know very well, or sometimes see a familiar face.. And it’s a good place to practice singing if you’re not a very good singer. You can just sort of blend in. All of us can use some awe in our lives. A sense of wonder is known to alleviate stress and gives an appreciation for life in general. Think of the stars at night, great oceans, and mountains, or your local cathedral. It’s easy to straddle the psychological divide between belief and non-belief if we let go of the need for a definitive answer. I’m fine with not knowing everything. I also reserve the right to begin believing if I feel up to it, and to discard that belief later if I find it burdensome. Isn’t it great to be out of the Middle Ages? A good way to get past the God thing is to see the word as an acronym for Good Orderly Direction. It seems a fair compromise to me. It was something my father suggested when my son would not take the oath at cub scouts, on the grounds he was being unfairly indoctrinated at nine years old.  Try as we might to re-frame things for him, he wasn’t having it. He never attended again. I often replace the word God with the word Universe. Semantics.  I remember asking my father long ago about his church attendance. He told me he simply couldn’t go, but that he thought the practice was good. He also allowed that he may have missed out on a beneficial part of his life by not being a member of a congregation.  Friendships. He saw the value in community, and perhaps longed for it. My father is 86 years old now. Beyond my memories of singing Latin mass with him when I was very young, he was a non-practicing Catholic during my lifetime. I suspect he is fully a non-believer, but don’t have the heart to pry further. I was an altar boy as a child, christened and baptized like my siblings. On the other hand, my mother attended church faithfully her whole life until she died last year.  As we kept vigil for her on her final days–her nine adult children and clan members gathered around the hospital bed that had been arranged in her living room–we sang hymns and read from a prayer book we found at the head of her bed in her room. The prayer book contained an entry called Christopher’s Prayer. Its personal suitability is uncanny. The prayer called Mary Stuart could have been written for ma. Coincidentally, her middle name is Mary.

The Saint Francis Assisi prayer perfectly summed up ma’s life as a person who daily exuded love and acceptance. It’s a pep-talk for good, for an unselfish approach to life and service. It was easy to receive as a final missive from our matriarch. Regardless of a person’s beliefs, replacing the words divine master with the word universe, or editing the text to taste, and it becomes a profound incantation for good. Whatever it takes. It’s the message that counts.

This 12th century prayer also contain more than hints at everlasting life. It’s a moral recipe that transcends time. By living a life of giving we live on in others, for some of us exists in others just as those we hold dear exist in us. Our presence here and now leaves its mark that continues on as an echo in time, reverberating endlessly down through the ages in the people around us, and through them, to those that follow. Is this what eternal life is? I leave ample room for mystery in my life, for the possible. Our final hymn was Sweet Low, Sweet Chariot, ma’s favourite and coincidentally written by a Choctaw Freedman from the Oklahoma area, first name Wallis. With her husband of 62 years holding her hand, thanking his courageous wife for a lifetime of memories, she passed on a Friday afternoon. The family’s pet dog keened at the very moment of her change.  Before we condemn those who believe, or faith in general, we might consider my mother. Perhaps emboldened by a lifetime of devotion to her church, it was plain to see that in her final hours she was not afraid. 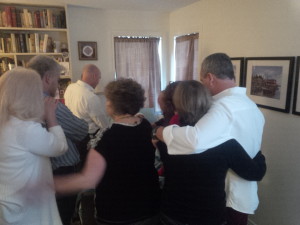 2 comments on “To Believe or Not”