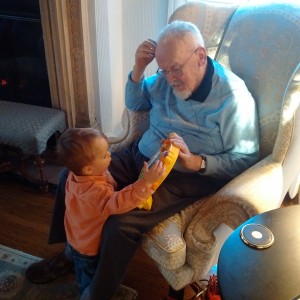 I have to admit, it’s happening to me,
It was something I could not foresee.

Decidedly, I’ll just let it be.

Oh, I may have dreamed it long ago,
But being so young, I did not I know

Despite it all, for the life of me,
And my attempts to live contrarily

For the truth is, I no longer rather
By this living eulogy you’ll gather

I’m turning into my father.

Today is dad’s birthday. He’s 87 years old. Each one of those years was earned.

Like most boys, my father is my hero. Though there came upon our relationship a darkness that lasted a decade. Even during this estrangement, there were lessons unfolding for both us, perhaps, more so for me. Though, it’s hard to tell.

It was my father who inadvertently gave me my animal totem when he told me at the age of fifteen that there wasn’t room for two roosters under the same roof, and since it was his roof… Regardless, eventually we got over it and I metaphorically became a cockerel (three children too!). Not so bad when you consider that the bird stands for pride, honesty, courage, vigilance, arrogance, strength, watchfulness and flamboyance, all traits I share with my father.

On top of that we are descendants of Celtic tribes, who considered the rooster a creature of the underworld, serving as a messenger of the hereafter, screeching out warnings of danger and calling out to the souls of those fallen on the battlefield. Perhaps my father knew I’d be an envoy from darkness, sent to share light.

Forgiveness is one of life’s greatest tests of virtue. It was my father who taught me this. His father was a troubled man, a WWI veteran with an impatient irascibility about him that bordered on meanness at times. War does that to people. Dad was a dutiful son to his father right to the end. (You can find his short account of Grandpa Gimpy’s death in Dad’s book about our family at trueandfree.ca). Reading about how he sneaked in to hold his father’s hand at the very end of Gimpy’s life serves as a beacon, a triumph of kindness over anger, of putting love first despite all else. It’s an image I continue to hold dear.

Of course, my father also taught me patience… using golf as his instrument. Hitting that damn little white ball all over Eastern Ontario with passion and commitment required enormous patience. He set an example, we followed. My father’s invitation that we golf with him meant that along the way, I also learned behaviourism. Intermittent reinforcement being the strongest reinforcer is plain to see in the game: you hit close to a hundred shots in a typical round, most of which are going to be not so good. But there will be one that’s absolutely amazing. One shot that makes all the pain of the rest of the shots dissolve away like salt in warm water.

In fact, I won the family’s golf tournament last summer with a perfect seven iron on a par three that bounced once just before the pin and almost went in, landing a foot and a half away from the hole. The rest of that day’s game? Ah… not so good. I could curse him or thank him for the gift of golf, depends on the day. But I keep coming back. Patience.

I learned to accept homosexuals from my father. While still just a single digit in age, I spied a sister cuddling her younger sibling while watching TV, and called them lesbians. I was invited for a chat in the inner sanctum of my parent’s room. There my father asked if I knew what a lesbian was. Of course, I really had no idea. He explained that it was a woman who loved another woman. He added that it was just how they were made and that, in the end, they were just looking for love, like anyone else. With that understood, I was dismissed. It was the 1960s.

Once through the homophobic peer pressure of my teen years, it was that wisdom I returned to. With maturity, I gained a greater sense of justice. Those words came back to serve me: “just looking for love, like anyone else.” It was all the justification needed for tolerance and understanding. Simple, effective, and just.

Later, at some occasion the subject came up again, this time with some of my adult siblings around. In one of dad’s famous quips, he said: “Sometimes, you just have to brush your teeth, close your eyes and keep an open mind.” I’m sure that ended the conversation. I’ve never had the balls to ask him about it either. Some things are better left unsaid.

My mother taught me to read but it was my father who made books available. We had bookcases all over the house. Even now, when I imagine a room, I see a bookcase there. Dad made it perfectly normal to sit and read, all day if necessary. Learning is my top strength and dad’s influence is never far.  I’m mostly a non-fiction type and I have some of his old books. The pages are yellowed and delicate like rice paper; each one a treasure. Like my father, I have a book habit. Not so bad at all.

When I began to scribble words of my own, it was my father who helped me along, patiently correcting my stuff with his editor’s pencil. I still look over the notes he put on texts I sent him. He also taught me to be frugal about using swear words in my writing, despite being an f-bomb dropping mofo most of his life. In one of his juiciest lessons, as a kid he told me swearing was “good old fashioned expression of emotion.” I was allowed to swear, just not at him or at ma. He wisely figured that as we grew socially we’d soon learn from the reactions of people around us and temper our language accordingly. How very true…

Dad taught me to be honest. As a younger man, I didn’t know anyone who was, so it mattered not as much. Over many years of conversations with my father, I’ve watched as he found just the right words to describe a subject. He’d go to lengths for precision’s sake, keeping reference books nearby to look up a fact or a definition. What emerged for me from the way he did this was the need to search for truth. There was truth, there was lesser truth, and there was falsehood. Often the lines between them are blurred and hard to discern; but truth is there, every time. It just takes a little effort.

Watching my father meant learning to dig a little deeper, to broaden the scope, to see a larger or more refined view. And in this way, he taught me that intent mattered. By filling in the history of a subject, a population, or a place, we learn something of the motivations of people, even nations. We do not exist alone. Having seen more than fifty countries during his navy service, I have visited the world through my father.

As a young man in Ottawa growing up during the seventies and eighties, I went to practically every large rock concert and saw many smaller bands that came to town. I had an extensive collection of vinyl music from the heyday of rock and roll. Later, my tastes grew from rock to blues to funk and jazz. All of these genres form the basis of my musical identity, so can anyone explain why it is that I now listen almost exclusively to the CBC?

As I write this, a collection of opera is playing on a second laptop nearby, someone’s favourites uploaded to a YouTube channel. I think it started when I put a radio in my garage. There, puttering around, doing something handy, I found opera and the classics to keep me company. As a young boy, watching my father at his workbench, with those old tools, each one with its place to return to after use, is one of my best memories. Opera still plays Saturday afternoons at one, perhaps just like it did back in the day on my father’s little radio. The smell of wood, the sounds of sawing and hammering, and the possibility of fabricating something out of raw materials left an indelible impression on me. Perhaps the radio keeps me close to dad when I’m away. After all, the CBC teaches, just like my father does.

My father taught me about love by way of his example with my mother for the sixty two years they were married before she passed away. Theirs is a love for the ages, and no mention of my father’s teachings is complete without also mentioning ma. I heard his sweet reassurances to her in her final hours. Though, for the record I’d best explain that it was probably more my mother’s patience and virtue that lay at the foundation of their longevity as a couple. What a beautiful gift that was. It meant that you could be as faulted as my dad, even as annoying, and still be loved. There is hope for us all.

I could write much more about my father and his impact on me. It’s easy to get carried away with this kind of thing, writing words in ways he taught me, listening to music he influenced me to hear, searching for truths the way I learned them at his knee. Like the time he told me it takes a hundred years for an immigrant group to acclimatize to Canada, several generations—something I still hold as my benchmark of understanding. After all, we are all immigrants here.

Or when I was worried about being a father for the first time. He, with nine children of his own, said to me: “Babies are like little miracles, son, they don’t take up much room, they really don’t cost much, and somehow, all of us find a way to move over a little bit to make room and welcome them into this world. You’ll do fine as a father.” I’ve used those exact words countless times with others and each time they have reassured as I was well over three decades ago.

I believe attachment to each other is our most fundamental need. My father told me of the people from where I came. By widening my understanding of our family’s history, I got a sense of my place in time, and how I live at the crux between the many who have come before me and those after. If we exist within each other as endless loops reverberating down through the ages, knowing from where you came means you are never alone. My father is part of me, and I continue to pass along his fine lessons to those who follow.

Rather than reluctance at becoming like my father, each glimpse of him that shows up in my life are hints of a re-discovered familiarity, and it gives me strength. My father is who he is, unapologetic, unafraid, and unique; good personal aspirations for any man. I welcome the part within me that is him, like an old friend sent to keep me company, as an Elder looking in on my life with love and compassion.

I’m very proud to call myself his son.

So happy birthday my dearest Dad, may you live to a hundred. 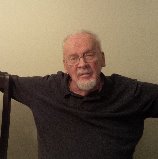 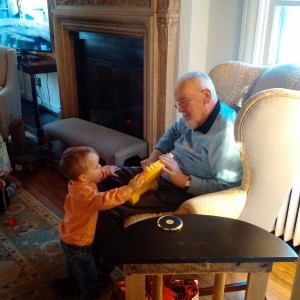 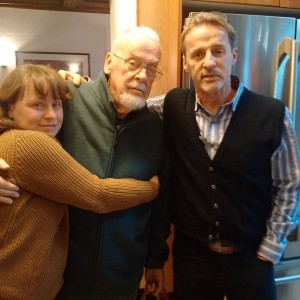 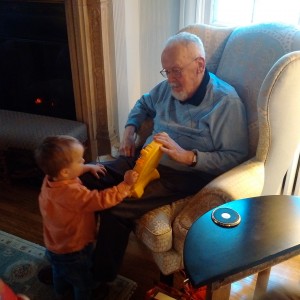 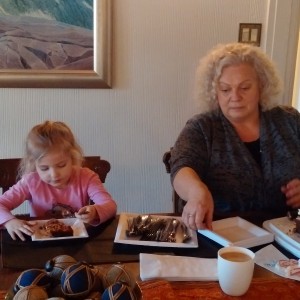 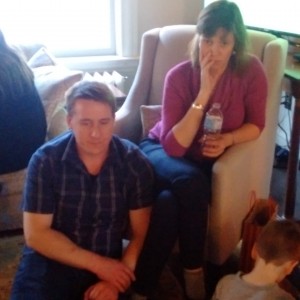 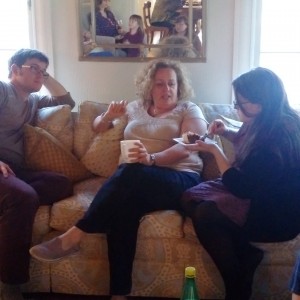 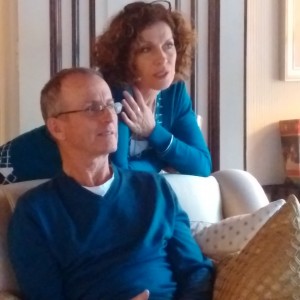 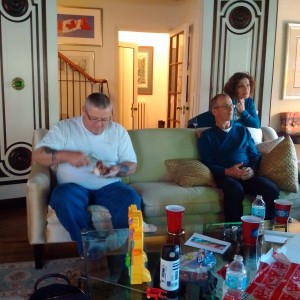 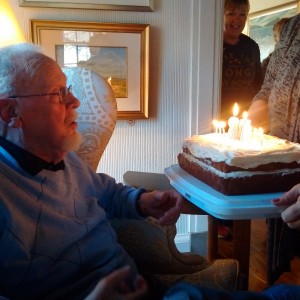 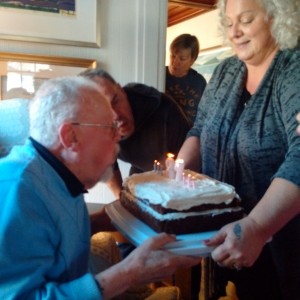 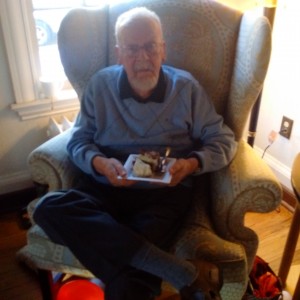 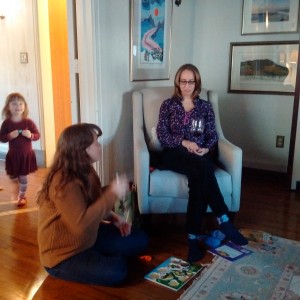