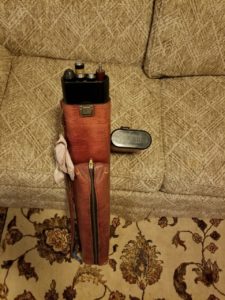 “Be great in act, as you have been in thought,” said the original bard. What was William telling us when he wrote this directive, this mini-missive for life? Could be he was urging us to be more confident, because confidence is a big part of what takes thoughts and turns them into actions.

Sometimes fear does this too, but not in the “great” way Shakespeare was referring to when he gave this advice. Greatness, being your best in a moment, is something we all experience, if only in our minds.

The question is how to take those fleeting feelings of greatness and bring them forth into the world.

Acting is one way, a version of the old “fake it until you make it” cliché. And as much as this strategy has become a trite call to be something other than yourself in the internet era, it’s still a pretty good approach. No wonder actors love what they do. They perfect the “becoming something else,” repeatedly, even becoming addicted to it.

This reminds me of when I first learned to shoot pool. Oh, not the very first time, because that was as a 13-year-old when my big brother suddenly turned to me one Saturday and asked me what I was doing. Ten minutes later, Stephen and I were nearby at Centennial Billiards on Bank Street playing on one of the small tables.

I was terrible. I’m sure Stephen was only moderately better. We didn’t play again for several decades. In the interlude, he visited over a hundred countries in service of gov’t, while I did… other things. But little did he know, by way of introduction to this wonderful game, of the seed he’d planted in me.

I played it on and off for another twenty years before I got much better. In my early 30s, in college, I often played at Edgar Lefevbre’s East End Billiards, just up the street from my place in Cornwall. I had a cheap two-piece cue and could count myself as a moderately decent player, enough to hold my own amongst other players there who were the equivalent of duffers in golf.

It was when I moved to Southern Ontario and began to run a sales team during evenings all over Southern Ontario that I stepped it up. Each night, I had three or so hours to kill between dropping off my reps and picking them up again. I drifted into the pool halls of each town to play snooker.

Pool, meaning straight pool, eight ball and nine ball, hadn’t taken off in Canada. These were American games played on smaller tables and Canada was a former British colony. We played on 6’ x 12’ tables and looked down upon the pool shooters to the south, preferring snooker. Later, I came to appreciate these smaller table games just as much. Nine ball is my favourite.

The Canadian, Cliff Thorburn, had been crowned World Snooker Champion in England in 1980. Then he’d blown away the snooker world by scoring a maximum in the Championships in 1983: a perfect game of 15 reds with 15 blacks and then all the colours to score 147. At the time, it was snooker’s equivalent to breaking the 4-minute running barrier record.

When, in 1988, I moved to Hamilton, eventually I started playing at The End Pocket, on Upper James. Marty Olds had bought the place and I’m pretty sure he still owns it. Alain Robidoux, a French-Canadian from Montreal was by then our top player in England, ranked something like number 8. I heard the announcer say he used a hand-made cue built by Marcel Jacques. I later found out Marcel had been a bowling hall carpenter, building those beautifully precise tongue and groove alleys, and made pool cues on the side.

I know this because on a whim one day, I called a pool hall in Montreal, and by luck they could get a message to him. He called me back a day or so later and I found myself agreeing to meet him the following week at one of his local pool room hangouts. He tested my stance and measured my body and arm length, as well deciding on the thickness of the cue’s butt so it would best fit my hand. 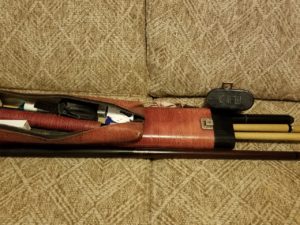 When I bought my cue, I still hadn’t met Marty and the rest of the boys at the End Pocket, but I’d been in to bang the balls around a few times. When I showed up to practice on table #6 at the back of the room with the Marcel cue, Marty noticed right away that I could play well enough. The cue gave me away as a serious player.

From then on, I was welcomed into the loose fraternity of the better players there. Never the best or most talented player, I only won one of his tournaments a couple of years later and got my name printed in the classifieds for it. But it was the endless games of golf and follow played for 25 cents a point that I remember most.

I didn’t like losing very much so I enlisted the help of Canada Fats, Tony Lemay, a gambler in Toronto who made a living at the racetrack and playing cards. In three lessons at $50/hour, Tony helped me find the stance I still use to this day, very much emulating Cliff Thorburn’s frontal approach to the ball.

By this time, I was playing in rooms from Scarborough’s Snooker Canada to places in London or Niagara Falls, and everywhere in between. I’d pop in and find a game, usually for five or ten bucks a rack and the table time.

Occasionally, I got to practice with a much better player. It was a fella in Brantford, Ontario who pointed out my biggest flaw, striking before I’d pinpointed the exact place on the ball down to the size of a pen mark, instead of a circle the size of about half a dime. My eyes were weak.

I think he was also frustrated at me not being a worthy opponent and could see my potential. He did something curious: he stood behind me and wouldn’t let me strike and move on until I’d corrected what it was he was telling me. Instead of allowing me to continue my poor form, he insisted on a correction on the spot by raising his voice and saying “no, no, NO, that’s not it, keep looking for it,” so I’d be forced to stop etching the flaw further upon my style, dismantling and rebuilding the weakness which held me back in the process.

Frustrated at first, by the time he was done with me in that one evening, I was making shots with such precision I ended up beating him. He nodded when I did, knowing he had beat himself through me. The score was just proof of the soundness of his lesson.

I think his name might have been Paul but I’m unsure. All I know is I’m grateful to this stranger for his coaching. I still think of him, still see him nodding his head in approval without saying a word. My game went up from there.

This was my pastime, not my professional pursuit. At one time, I considered buying a pool room but realized it would run my love of the game if I was forced to sit in a room all day hoping customers would spend money. I played for fun, and a little money, but the real fun was in playing well.

Never intending to become a better player, I had simply taken my thoughts about playing and acted them out. I’d faked my way into a level of mastery of the game by first getting a world class cue and then forcing myself to play to its level. Funny how that works.

There are two other enormous excellence lessons I learned while playing pool. One was about visualizations, the other about flow. I’ll report back to you about these in other posts.

In the meantime, I like to believe this era in my life contains valuable lessons, ones’ I still do my best to apply today.

think of ways you can act “as if” and see yourself in a different light. What are some ways you can realize some of those thoughts which surface in your mind, begging to be turned into actions? Often thoughts come and go and are forgotten. What if we acted on some of them instead?

Three hundred years after Shakespeare’s missive, what can we do today to honour his advice?

Sometimes confidence comes from little wins, ordinary victories accumulating over time into a meaningful whole, call it a gestalt of competence if you will.

At other times, it comes from taking risks. Something daring, perhaps done on a whim, and which can open a whole new area of life just because of it’s power as a linchpin to action.

It’s like putting on a good suit. Suddenly, people act differently around you and accord you with more respect and power than when you’re dressed in work clothes. Suddenly you’re standing straighter and taller, speaking clearly and with better manners. More about this later.

Suddenly, when we take risks, people appear along the journey and contribute something to our game. It’s just how things work, beautifully.

Realize the difference between thoughts and actions is often found in a simple leap of faith.

Go with it I say. Do it now, chase a passion.