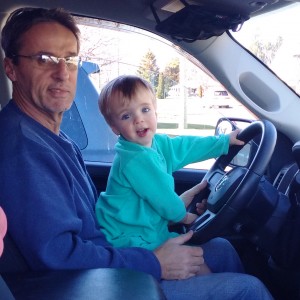 Mel’s in the grocery store, Howie wakes up in his car seat sweating and pissed off.

I do what any good father does: I unbuckle him, put him on my lap and proceed to give him basic steering lessons in my truck.

It’s dusk, foggy, and nary a soul around in this sleepy town. We looped around and around, watching for his ma to come out.

Suddenly, a large woman, shaped like a battle ax my father would say, steps in front of my truck, motioning me to stop. As I lower my window to inquire as to what she wants, she holds her hand up signaling incredulity. With exasperation in her voice she demands: “what do you think you’re doing?”

“Well, I’m teaching my boy to drive,” I answer.

Howie, having done ten or fifteen laps of the parking lot by now, getting better at it each time, looks on with pride. I can’t say for sure, but he might have been expecting a compliment.

“Teaching him to drive? It’s unsafe!” she admonishes.”And that’s illegal!!”

“Oh come on lady. He’s with his father. It’s the safest place in the world for him.”

“You can’t do that!!” was her answer. And, with increasing frustration, she became angry: “It’s against the law!” she shrieked.

I wanted to say something clever. I really wanted to push her over the edge and tell her off. I wished I had the presence of mind to tell her to know her place around a boy and his father. Instead, all I could do was say: “Lady, frig off.”

I guess I’d had a long day too.

Then Howie drove away. Funny how the kid–at two and half–knew how to do that at just the right moment. All we could hear was her loudly repeating my plate number over and over as we pulled away…

I responded to a knock on the door and insisted the constable come in. He asked me if I’d had someone accost me in the Metro parking lot. “Indeed I did,” I told him.

“Was your boy on your lap, driving around in your truck? I don’t have to tell you about how potentially unsafe that is, do I?”

“Of course not, you don’t have to tell me that at all, officer,” was my reply. “But here’s what you do: Ask Howie yourself if he was driving”, I said, straight-faced, as I pointed to my little boy watching Bo on the Go nearby.

He asked: “So were you driving?” Howie said nothing. Solid kid.

I said to the cop, “I’m not saying anything like that happened but if a guy happened to be waiting for his missus in the grocery store and one of his kids was crying in the truck because it was past bedtime, wouldn’t it be smart of that father to let his kid practice steering in a practically empty parking lot to keep them distracted? After all, it’s on private property and traffic laws don’t apply right?”

“Sorry she got you here, wasting your time,” I said.

“No problem,” he replied with a wave as he walked away, “always nice to see you again Mr Wallace.” 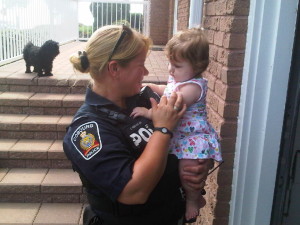