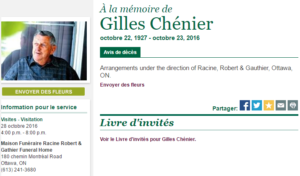 Gilles Chenier passed away this week from cancer at age eighty-eight.

He lived two doors away from my parents on Falcon Avenue in Ottawa for more than six decades. He had a pool table in his house when I was a kid. This was the height of cool in this youngster’s mind in the 60s. Imagine that? A table in the basement…

I remember coming back from my first communion where Gilles and his first wife Marie had become my godparents. I was just sort of hustled through the ritual, not really getting it. The idea of having godparents didn’t register either. I saw it as a plot to foist me on another family where I would be barely tolerated or even ostracized. I was often in trouble for one thing or another in those days and our house was a little crowded. I remember my mother and Marie talking about things that day, though I couldn’t tell if they were discussing how I was dressed and the ceremony… or when the hand-off would occur.

Someone baked a large cake shaped like a lamb—for the Lamb of God. I’m pretty sure my new godmother had either arranged it or baked it herself. I was so impressed; there was something in all this for me after all. It was covered in white icing and a lot of coconut. I thought this was inspired decorating. It was a decadent treat for a boy who came from a family of nine kids. I can’t resist coconut to this day.

Our families were connected more so because my mother and Marie were pals. Through the years, it was understood that the Chenier kids were an extension of our clan. In an era that saw sixty kids living on our small block, Gilles’ two sons and daughter from two doors over were like one of us. The house between us was occupied by Gilles’ father, whom we called Grandpa Chenier. He roughed in the basement rooms in our house for my father. He also grew a large back yard garden each summer and had a quiet and patient side to him with us kids.

Tragedy struck my godfather at the very height of his powers as a husband and father. He and his wife were backing out of a driveway after music lessons for his beloved daughter when they were struck by a drunk driver who had crossed the center lane, killing his little girl. This broke her mother’s heart, her survivor guilt drowned in a secret alcohol habit for many years. When the family finally discovered what was going on and intervened, she was days away from death from cancer. She had kept this information from everyone. They had scant time to say goodbye.

I moved on from my parent’s neighbourhood and saw my godfather only here and there over the decades. Recently, I returned to my hometown to be near my aging father. On occasion this summer, I’d see Gilles out on his porch taking in some fresh air. I took these opportunities to go and rekindle our relationship. He was accepting and grateful for the company. He had terminal lung cancer and was sent home to die. Drink and smoke whatever you like, he was told. Several times the missus and I with our two children in tow sat on his porch and steps with him and his dog and talked about life. Once my father ambled over with me to sit and visit for a while.

He’d remarried and outlived his second wife, Simone, her leaving him a little pug named Simon. My children delighted in visiting with Gilles and his little dog. They were surprisingly well behaved and Gilles was patient and kind and sweet. He was grandfatherly.

He was too old and too experienced and too short on time to mess around with polite and safe small talk. Open and forthright, he cut right to the chase on every subject we discussed. What a great lesson it was to witness and be a part of: all of us should speak and act as if we have little time left. By way of his example, this was part of his gift.

I talked to him about how people who die don’t really leave us. I explained how I thought the idea that we live in our own bodies and minds—separately from those around us—was an inadequate way to describe human reality. I said it is more likely that a part of us resides in others just as a part of them remains in you. That we exist in each other is a more appropriate description. And that people continue to echo endlessly on down through time in those who have known and loved them. Though the part of me that might reside in you becomes uncertain after you pass; the part of you that resides in me unquestionably remains.

I had taken a risk telling him this. Who did I think I was? But his answer surprised me.

At the time, the traumatic event in Nice, France had just occurred. Gilles told me that he’d been thinking of his second wife Simone and how they had walked the streets of Nice on a trip, the very streets that were shown on the news. He said he could picture himself there as if reliving those moments all over again; like she was still with him. It felt so real he said, and it happened often, he added. He said he believed me. He said, “You know, Christopher, I think that’s true.” I was relieved and happy for him at the same time.

He was an interesting man who only ever worked for one family: the Ottawa Greenbergs. He mentioned when he was a teen he took an evening course in bookkeeping at an academy on Dalhousie Street in Ottawa’s Lower town, a stone’s throw from Parliament Hill. In those days, the area was an enclave for poor Jewish, Irish and French Canadian families.

One day on his way home, the family matriarch, buxom Mrs. Greenberg, leaned out an upstairs window as he walked by and asked him to confirm what she’d heard, that he was taking a course in bookkeeping. After answering yes, he was invited by her to join the family business. He told me he didn’t know much about bookkeeping because he had just started his course but the auditors who did the company books got him set up and working.

Minto Developments went on to build much of the nation’s capital residential and commercial developments over the following decades. Gilles Chenier worked there his whole career, retiring as vice-president 40 years later.

Another interesting anecdote was the matter of a pension. Gilles recounted that once he caught Mr. Greenberg in a good mood, he could be approached about anything. Since Gilles was one of the top company numbers men, he picked his moment to bring up pensions for Minto employees. The answer was as baffling as it is amazing. Mr. Greenberg told Gilles it was a really good idea. But, any man who devoted his life to working for the Greenberg family would never have to worry about a pension. And that was the end of the discussion.

At age eighty-eight, Gilles was still receiving his weekly salary from Minto Developments though he’d been retired for over thirty years. On top of it, he still got his Christmas bonus every year too, just like any other employee still on the books. And all this was done on a handshake. It was a time of high work ethic and loyalty long gone. If Gilles hadn’t told me these things himself this summer, I might not have believed them possible.

He also lived in an era that saw the deep sacrifices of The Great Depression mold people’s attitude so that they were ready for the great post-war boom of the 50s, 60s and 70s. Besides courage, perseverance and grit, he also had character and charm; a handsome man with a booming voice. He appreciated a pretty girl.

My father and I sat with him on his porch this summer, reminiscing over the six decades they had known each other on this street. My sister saw us and came by to say hello. After warm kisses on both cheeks, Gilles got a big welcoming hug. Unbeknownst to her, and while she was still in his embrace, he stuck his tongue out at my father as if to say, “I’m having my way with your daughter.” We nearly pissed ourselves laughing.

And that was another lesson from Gilles. His body racked with tumours and growing weaker by the day, he chose to laugh. Resigned to his fate, he could have moaned and been consumed by self-pity. No. That was not his style. Instead, he looked forward to one last fishing trip with his sons, laughing every chance he got.

He was an inspiration, and for what it means, it was an honour to call myself his godson.

Goodbye sweet godfather. You are not gone at all.