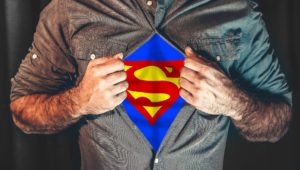 Where have all the real men gone? That’s a question that comes up often lately.

Not just from women. No. I worked hedging farm energy costs all last winter and met a lot of real men. Tough and grizzled career dairy farmers who knew precisely their role lamenting the same thing: where are all the “real men?”

Out east of Ottawa, all the way to the Quebec border the French farmers call our feminized men “les hommes rose.” Pink Men.

I get this query about good men from women practically every day. Just last week I did business with a formidable lady at an iconic city establishment. A divorcee, we got to talking: she’d be a catch, a real tour de force. “I’m not giving up” she says. “There’s a real man out there for me.”

And there is. I’ll keep my eye out for her.

It’s a confusing time to be male. First we went from an agrarian society to an industrialized one. Then the vote was expanded so all men got a say in how government is run. Reward for the privilege of dying for your people I suppose, which men have been doing forever.

After the Second World War, women’s enrollment in universities rose each year, to where there are now more female graduates than male. Laws were rightfully changed so that inequalities in the workplace were addressed.

Only now, it’s gone bananas. Men can’t open their mouths without risking offending someone and being sent off to sensitivity training. Or worse….

Men have been stifled like no other time in history. The very culture men created has turned on them and is now biting them in the ass.

Qualities in men revered for all time are obscured by a system devouring itself from within. It’s counterproductive.

Where are the Brave? The Courageous? The Decisive? The Protectors?

I’ll tell you where they are: hidden among us. Perhaps a little subdued of late, but every once in a while a crisis occurs and some exceptional man reminds us of the ideal.

Today missus was returning from a shopping excursion with two kids strapped into car seats in the second bench of our Honda Pilot. Behind the passenger seat sat our little girl Charlotte, behind missus was our boy Howie. All children are little miracles but in Howie’s case, maybe a little more so. 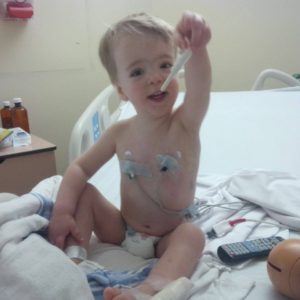 Having spent his first six months at Sick Kids, he’s been in and out since. He’s doing better now. If scrambled eggs, mashed squash, pieces of pork fat and the odd cheese and skinned apple are considered, then half his diet is solid foods.

My father had five sons. He had no namesake among his grandchildren until that little boy came along. I tease dad it’s because he was a drinker as a young man and it’s taken this long to forgive him. Dad can take a joke; he’s been a teetotaler for over a half century.

I know the Kurdish will name a child after a relation but only once deceased. However, while flirting with our family’s genealogy, I discovered it’s a Catholic tradition to name a son after his grandfather. I chose to honour my father. 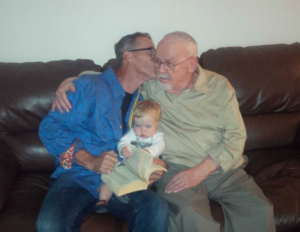 Mother Nature makes more boys than girls outside of times of famine for good reason. Boys die in childhood at a far greater rate. If they survive birth, the risk of death by misadventure or accident is a sad corollary to a boy’s existence.

When my first son reached age 25, I breathed a big sigh of relief.

In addition to Howie’s medical challenges, at one time he’s also been surrounded by a dozen specialists at a hospital trying to dislodge something he swallowed. His throat is very narrow, about as wide as a good sized pen. Not much room for choking mistakes.

He’s fallen off a swing and moved his bottom front teeth back. Another time he actually got stuck in a toilet toddler seat, bent in two, wedged in tighter and tighter as time went by, and had to be rescued by fireman. 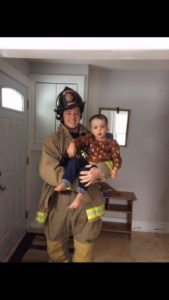 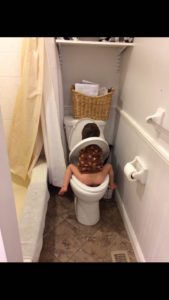 Of course, I wasn’t there at the time. The pictures tell the story.

As a man, I realize I cannot be around all the time. There are long days when I’m away from my wife and kids working where they must fend for themselves. All I can do is provide for them as best as I can, making sure they are safe when I’m at home, holding them close to my heart when I am near. 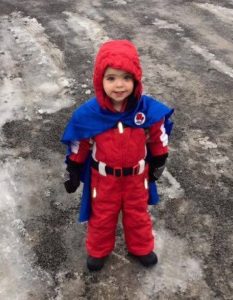 But today we almost lost him. While his mom kept her eyes on the road travelling at speed down the highway, the boy grabbed the unused seat belt from the middle spot, twirled it around and around somehow until the full length of it was unfurled from its spring-loaded mechanism. Then placed it over his head.

It locked down tight. The more he moved, the tighter it became. There was no slack with which to back it off. It wasn’t a matter of unwinding it from his head because he’d twisted it over and over first, the way you tighten a tourniquet, and then inexplicably put it over his head while his mother drove down the road.

His thin neck and airway were encircled, being crushed as if in the grip of a snake.

Luckily, just as his big sister Charlotte alerted her mother, missus glanced in the mirror and immediately noticed his colour.  In her horror, she barely registered her daughter’s words for what she saw struck her like a bolt of cold fear.

Her boy was gray, on his way to blue. She saw the belt wrapped around his neck.

At three, whimpering sounds emanating from his mouth, he couldn’t countenance the gravity of his predicament.

Missus pulls over and springs into action. Yet, for all her efforts, she can’t get that belt off him. It won’t back off because it’s fully extended. By some unlucky fluke, he’s wound it around his neck in just such a way his every movement or any attempt to loosen it only made it tighten.

The belt had turned into a python refusing to relinquish its prey.

Mel knew the only way out was to cut the strap. She searched frantically for scissors or something in her console. Finally, with the boy fading, in a panic she jumped from the car and attempted to wave down passing cars.

The first ones going by waved back.

Just then she realized 911 help would never arrive in time; moreover, she was overwhelmed with crushing defeat considering that little Howie could come to this: a self-imposed death choke on the side of the road.

She was trapped helplessly trying to hold off some of the pressure from the kid’s neck, unable to release for an instant to call for help, a situation made worse because her phone was out of reach in the front seat.

However, someone had spotted her wild gesticulations from way down the road.

A lone driver pulled in behind her.

A young soldier in combats emerged from his vehicle.

And like all young men who live their lives ready for action, he came prepared.

One look at the boy and a tug on the belt to assess the severity of the locking choke and out came his weapon: a hunting knife used to “cut up tires at work.”

A couple of efficient slashes at the belt and the tightened noose released its fatal grip on little Howie’s neck.

The frightened toddler returned to his distraught mother’s arms.

Of course, she was a mess by this time.

Contemplating the death of her child, one she’d nursed and kept from the grave for nigh on four years,  a veritable soldier for motherhood herself, the next few minutes passed in a blur. She’s unsure if she even blubbered inadequate thanks to the mystery man.

She took some time to compose herself while sitting in her driver’s seat, no doubt glancing behind her to look at her children for reassurance.

When she finally dried her tears to see well enough to drive, pulling away she noticed the rescuer had stayed there too. He waited patiently in his car parked behind her as she gathered herself, as if still on duty, gallantly ensuring he was the last to leave the scene.

She hadn’t even asked him his name. 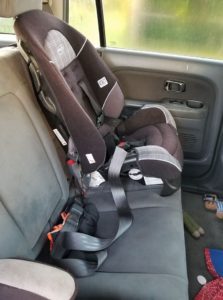 Well I found out his name is Shane Chafe. A heavy duty equipment mechanic from Newfoundland newly posted to Ottawa in service of our nation at National Defence Headquarters.

My mother was born in St John’s, Newfoundland.

The island’s history and culture have been part of our clan’s fondest remembrances of her. She had 10 pregnancies in 12 years, bearing nine healthy children. Her entire lifetime was spent singly devoted to her family.

She knew our little boy before she passed away a couple of years ago. It was at home, surrounded by all her adult children and husband of sixty-two years. She had supported us in so many ways in Howie’s first few months of life, seeing him through his roughest patch.

Unfaltering throughout her life in the practice of her Catholic faith, my mother sent us an angel today.

Not a pink cherub with a glorious set of wings floating on a cloud looking sweet and pure and full of God’s grace. No.

She sent us a man.

Charlotte calls him a warrior. “Daddy a warrior came and rescued Howie” she told me excitedly from the upstairs window of our house almost as soon as I pulled into the driveway this evening.

It’s not often that one gets the opportunity to thank someone for saving your boy’s life. I’ve had to do it before. There is no limit to the depth of gratitude I feel for this young man and his exemplary actions.

What are the chances the universe would put this exact person with these skills in this place at this critical time of need? This was divine intervention if there ever was such a thing.

While others drove on by, sedated, unaware of the life and death drama at hand, this man acted like men do.

He had the courage to stop, to bravely assess the situation while panic ruled, and then acted decisively to protect this little boy’s life.

And his words to me later?

“I’m just glad the boy’s fine and it worked out,” he said. “I’d want someone to stop for my gal if she was in trouble and I wasn’t around.”

Mr. Shane Chafe good sir, I owe you one.  You deserve a medal.

You’re this family’s hero and we’d like everyone to know it. 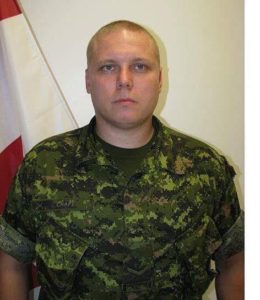 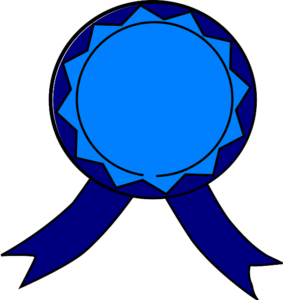 8 comments on “WHO IS SHANE CHAFE?”