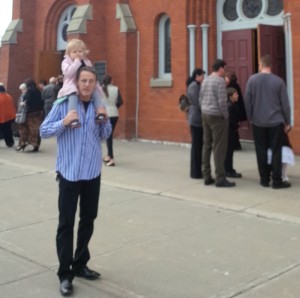 I remember the first time I got straight in the mid-80s. I’d lived a life completely outside the law for a number of years, often carried a gun making my living selling drugs and running a crew. Finally my addictions caught up with me.

I ended up living in a halfway house, sleeping on a mattress on the floor of a tiny room with my then wife. I’d been shot a few months before, then stabbed out in front of the house soon after I arrived. Misunderstanding eh?

It wasn’t safe so we stashed my two-year old son in the North of BC at my sisters. Leaving the street isn’t always easy.

Here I was at the Anglican Church at the end of James Street one Sunday.

It was a mass celebrating All Saints Day – where we remember those who have passed, some of whom are perhaps not yet in heaven – whatever that was. I was feeling the full weight of the “piece of shit” self-concept that was only now weighing more heavily on me as each day passed.

I had nothing: no job or skills beyond what was required to survive the streets, and those talents were increasingly in question. Being shot and stabbed does that to a guy, makes him question his abilities, go figure…

Still, to sit there among those regular parishioners, the good folk who had worked and served their whole lives, none of whom had an inkling of the desperado sitting in their midst, I felt like a hypocrite.

I dressed well enough to blend in, even stand out, but that was the limit to my facade. I went through the motions of the service, drawing on my years as an altar boy with the Catholic Church, days that seemed like an eternity ago, if they ever happened at all…

When it came time to commemorate the dead, we were instructed to think of them now. Silently, I counted them out in my head, each name appearing in my mind’s eye like a flash card from the past; each one with a story of tragedy and despair, misfortune and waste; each one now gone forever, spirits floating in the ether, occupying spaces only in the remembrances of those who knew them.

Counting more than fifty names that morning, every one them became a prompt for the dimness of my future. The reach of the street held me tight, my tomorrows predictable, a sojourn into this community of peace just respite from the coldness of my life. Live by the gun…

Usually, I sit with my back to the wall if I can, still do in fact. As if to signal my surrender, on this day I sat way up near the front, perhaps so I wouldn’t have to see all the others. There,  I listened intently to the sermon. Reaching the deepest part of my chagrin, the hopelessness of existence, the confusion and disappointment I’d been to my family, my wife, my child, to the world, the priest said something that got my attention.

Indeed, his words were the salve my soul needed to live another day. Looking towards me, and seeming to momentarily lock eyes with mine, he said, “church is not a country club for saints; it is a hospital for sinners.”

With that simple utterance, a tiny ray of light began to occupy the smallest part of my heart. Dull at first, barely a luster of gray or a mix of black and white hues that instilled in me not colour but promise, of something I later learned was hope. It was a hope that with each passing day grew into something more, from a glow to a glare, and eventually, to a blazing fire of possibilities. I was in the right place after all. This edifice, with its rituals, its traditions and its community, existed for me.

It’s why I still attend the odd time. It was there I found a measure of acceptance, declared to all by the fellow running the show.

It’s a hospital for sinners.

I, for one, will be saddened if we abandon these places of contemplation.

May all you find church today and every day, in person, in metaphor, and especially in your hearts and in each other…

Stay powerful, never give up
cw

Book a free call with the advisor to men, mentor at large here