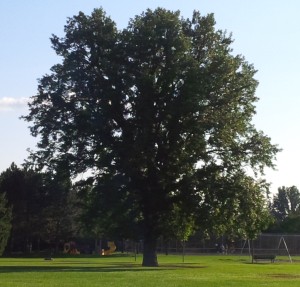 Anxiety and stress are good things. It means your body and mind is working as it should.

I like to tell people who are anxious that they should be thankful for their anxiety because in days of old, they’d be less likely to be eaten by a bear.

It’s also a signal that you care about something. After all, if you didn’t give a hoot, there’d be no reason to feel anxious. You have no vested interest in feeling fearful about something that you have no feelings for.

There you have it: both can be a good thing, and it means you care. Something has meaning for you. We are meaning-makers: we search for meaning our whole lives. You’ve found some of it.

I wonder if Olympic athletes are fearful before they compete, or if actors feel anxious on opening night? What about those who have to give a speech in public, folks like politicians, academics, even Tony Robbins?

All of them feel it before they go on.

Top performers in every field you can imagine feel nerves and anxiety when they are challenged. I did my best exams in college when I felt my most anxious. Executives in companies and people in everyday life feel it. We all do. There are people right now all over the world feeling anxiety and stress. You are not alone. It happens to everyone.

When you ask people who have excelled at something, you rarely hear “it was nothing, no big deal,” unless they’re bullshitting, or trying to calm themselves.  No. Usually, you hear how they wondered if they’d pull it off. We hear about their fears, their trepidation. They might downplay something, probably so they don’t get a big head, or just to put things into perspective. But almost always, they use determination and perseverance to stick at something despite how awful it might have felt at times.

It’s like the sapling growing in the forest: when the wind blows it bends deeply, opening tiny cracks in its bark that quickly fill in with new growth. In this way, it thickens until it becomes as solid as the giant oak it was destined to be.

Anxiety and stress can be our wind, there to make us grow.

Here’s where it gets interesting. When we are pushed, we often find a deeper level of creativity or resourcefulness that we can call upon, and we often do things we never thought possible when under stress.

Everyone has heard the story of someone lifting a car off someone trapped underneath after an accident, or braving flames to rescue someone in the nick of time, acting without thinking out of fear. Being scared shitless can make us push back. As a kid, I ran my fastest getting away from that bully that was going to kick my ass; it made me go like the wind. We all have times we can remember where we rose to challenges in an unforeseen way. While such heroics sometimes make the news, all of us have a hero inside us coming up with new ways to overcome obstacles and burdens–often energized by fear.

You can use that stress and anxiety to search and find answers that you perhaps didn’t have before. The discomfort is there to propel you forward into action, often new action. Not to fear it, but, instead, to use it.

Here’s a suggestion: use three Ds to handle anxious thoughts. First detect a fear producing thought. Then detach from it–making no particular judgment about it–just that it’s there. Then detour around it by leaving it to hang and disappear on its own, realizing that you are not your thoughts. You know how as wee kids we blew bubbles?  Thoughts are like bubbles that hang in the air for a moment and then burst. They just come and go; some are useful, some are useless, some are freaky shit. Detect, detach and detour.

I do something similar with my feelings. Allow yourself to feel them as temporary physical sensations, without allowing them to define you. You are not your feelings either. Instead, look to how you can put your body to good use in that moment, in a way that allows you to live truer. How can you take your emotional energy and use it to live what you value, to pursue a goal, to meet your desires?

What if you find yourself with big anxiety? I’ve had that. It’s a bitch. I’d get a big pain right in my chest, in the sternum. First time it happened, I thought I was having a heart attack. Friends took me in to hospital where I got hooked up to all the machines and had blood work done. Old doc, about seventy, came out and told me my gullet was flipping. To me that meant there was something seriously wrong as I imagined some part of my chest tied in a life-threatening knot. I wondered how the heck I did that, and would I need surgery?

Seeing the dumb look on my face, doc tells me, “You’re having an anxiety attack. You can go home now.”

What the…? Anxiety attack? Me? Isn’t that for girls?

I had a bunch of them until I learned how to get control of my body. Another old guy, this time a psychologist-priest I knew, told me to go for a run next time it happens. He said you can’t feel anxious and run at the same time, you’ll fall down if you do. There’s something about putting one foot in front of the other at any speed that alleviates the tension. The deeper breathing helps too. Sure enough, within a few blocks, the tightness in my solar plexus would dissipate.

It worked like a charm. After a few months, I never got them again. That was thirty years ago.

What’s interesting is looking back at those episodes the same principals apply. I used my high anxiety to get moving, first by running off the tension and then to make huge adjustments in my life. I had just given up a ten year heroin and cocaine habit. I had a three year old son we just brought out of hiding after stashing him with relatives for a few months. A bunch of my friends and “co-workers” had been killed or died recently, and even I’d been shot, stabbed and had an arm broken with a bat over the course of a few months. Now I was in school full time studying behavioural sciences and working as a doorman/bartender at night. So my anxiety meant I cared. My stress was there to push me forward.  So is yours.

Anxiety and stress is just part of your energy, a deep wellspring of power you can harness for good. It’s a signal to find a way to live according to your own version of value-based happiness.

And here’s perhaps its greatest gift: It can put you into the zone. That state of flow that represents your best level of confidence.

Here are three ingredients to getting into your zone. But first, here’s what I mean.

I used to play a lot of pool. Snooker, nine ball, you name it. When I was in the zone, there could have been five hundred people watching, twenty-five people watching, or no one watching, it didn’t matter. I’d prowl around the green baize cloth, my eyes focused so intently that I wouldn’t even notice my surroundings, only what was under the lights. Commanding concentration shrank my world down to the size of the 6 x 12 or 4.5 x 9 foot table. The key to pool is controlling the white ball and I’d feel as if I could put it within a quarter inch of anywhere on the table, as if I had it on a string. If my opponent spoke, I wouldn’t acknowledge or hear them beyond what information they could convey that I needed to control the table. Time would seemingly stand still; I’d feel no hunger. And it was fear that would put me there because before every big money game or tournament match, I’d feel anxious to the point of shaking throughout my body.

The first zone ingredient is to master the fundamentals of whatever it is you are involved with. I’d practice twenty hours per week at my pool game, taking on players all over southern Ontario back in the day. I even got coaching from Canada Fats, Tony Lemay.

Second is to focus one hundred percent on the task at hand. At every college or university I attended, I sat in the front of the class and took the best notes possible, completely absorbed in the lessons of the day. That allowed me to excel.

And third, try the impossible. When you allow fear to put you into the deep trance of your zone, calling upon everything you know and have practiced, creative solutions emerge that you never knew existed. I’ve made impossible shots at the table while in my zone. When pro ball players learned to block Michael Jordan’s jump shot, he came up with the fade-away jumper during a game to compensate, sending the ball over defenders to the net. Somehow, acts of confidence are summoned from within flow, often surprising even yourself.

If you can see fear and stress and anxiety as your body’s way of signaling you have extra energy to devote to living according to what you value, suddenly a force that once held you back is replaced by a power that brings out your best efforts.

Before you know it, fear, stress and anxiety is replaced by action and confidence.

What a gift this thing we call fear.

P.S. Have a fear you need help with? See me at ckwallace.com, or  contact me here and we’ll talk 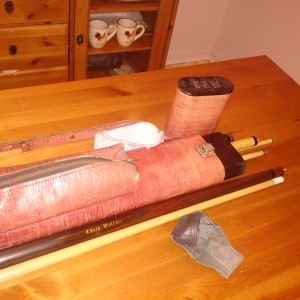 Top: The Acorn Tree. A large white oak that has been growing near my parents home in Heron Park, Ottawa, since long before me.

Bottom:  combination snooker and pool cue. Four shafts, three extensions fit in the custom case. I traveled to Montreal to meet and be measured by Marcel Jacques himself somewhere around 1990. In his day, Marcel was one of the best custom cue makers in the world.