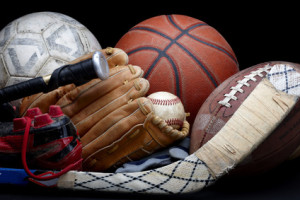 We often played out in front of our home on Falcon Avenue. My father says there was something like sixty kids living on our stretch of the street, a two block long avenue in Heron Park. We played every kind of game there. The Mackey kids two doors down often had a ball hockey game going, something that went on for most months of the year. You could look up the block’s entire stretch from Brookfield to Heron Road some days and see several of those pick-up games going on at various progressions up the street.

Our family members were baseball and football players. Most of us played baseball every summer. I wasn’t very good at it but eventually my sturdy size and quickness allowed me to acquit myself decently in my last year playing Little League baseball for the A&W Cubs. I was an outfielder and could reliably run down a ball about half the time. Not quick minded enough to play in-field, I was happy to become a decent hitter over time. We won our local championship my final year. A win meant coupons to use up at the Bank Street A&W, in an era when gals still rolled out to the cars on roller skates to deliver Teen-burgers and Root Beer on little trays that affixed to the rolled down window of your car. These were innovative times for a kid.

Football was a bigger challenge. Eventually I played for the Merkely Bears around age thirteen and wore the most mud stained uniform of anyone’s in our team picture. An embarrassment then that became a badge of pride later. I think my jersey number was 81 or 82. I was never that good at passing the ball and was sent to the line as meat, sacrificed as protective fodder to at least delay the opposing defense’s attack on our quarterback. Out-sized, I resorted to spearing attacking players in the shins with my helmet; often other team’s whole line was too big for me to put up much opposition. I remember gleefully getting my revenge on some of the bigger boys who were trampling me into the mud that way. And acting innocently afterward despite their protestations to the men in stripes.

Leading up to those experiences were the many hours of practice spent with my brothers Duncan and Stephen tossing baseball and football back and forth on our front lawn. It was the two of them that were mostly responsible for my being able to ever catch anything at all. There was a manhole cover on the road allowance portion of Grandpa Chenier’s lawn next door that we used as a pitching mound. Duncan could throw pretty hard by my estimation, and Stephen was game to catch anything he could muster, often jibing his Irish Twin over form and strength.

It was where we tossed the football about. We had one in our family, a gift from our parents that was part of our communal sports equipment. We always seemed to have the stuff necessary to keep us outside as much as possible. With nine kids, the immediate outside became a necessary house extension, area needed to keep my mother’s sanity.

The football is a diabolical shape if you’re a kid trying to predict where it will go at speed once it hits the ground. It rolls with a randomness that befuddles and ridicules. You go left and it goes right; you reach low and it bounces high, as if purposely put there to reveal your awkwardness. Catching a wobbling ball was just as difficult, so it was the spiral that we sought. There was a way to grip the ball in just such a way that it would sail through the air like a missile, nose first and aerodynamically still, spinning with purposeful physics, so that catching it became just a matter of extending one’s arms to receive the ball in the mid-section. There you could tuck and cradle it against the body securely and run for distance.

We spent a good deal of time kicking that ball too. My hands weren’t big enough to quite get the kind of grip on the ball that would allow a consistent spiral. I dare say if I ever threw a spiral it was by chance. The wobbling ball wouldn’t go very far when I launched it so I preferred to kick the ball. Most of my kicks were end over end affairs. But every once in a few dozen, I’d kick the ball and stand amazed as it sailed through the air in a perfectly spiraled form, gaining more height and distance as a result. These were cause for encouragement and served to keep me in the kicking game. Still, my best kick probably equaled Duncan or Stephen’s regular throw.

One day in particular that I remember, likely around age eight, my father came home just as we were playing outside with the football. I’m pretty sure he was in full naval uniform, the gold brocade and buttons of his dark navy suit and white officer’s hat glistening in the sun. He was quite a sight in those days my father was. He would have disembarked from the Number One Bank and Heron bus near the top of the street on Heron Road and walked casually down our street to his family, passing the assembled kids from home after home, housewives often sitting out on front stoops and steps.

By chance, on this day he stopped and chatted with us a bit. I’m sure my brothers were both there. He told us he used to play football back in his younger days. Of course, if you’ve ever seen black and white photos of teams from the earlier part of the last century, you can imagine what kind of uniform my father would have worn. It would have included very little padding, knee high socks and full cleats. He probably wore one of those all leather headgear hats with no mouth protection. As he spoke, I imagined him right there and then as a gridiron god, playing with the men for real.

Dad explained that he was once a kicker himself. Said he had a knack for it, especially on the third down punt. That’s when the offensive line protects the kicker who receives a long snap from the center ten yards back and kicks the ball as far into enemy territory as possible. It’s a mighty kick, and a last ditch play to gain field position despite running out of downs. Finally, as if to underline what he meant, he asked if he could give it a try.

Surprised, one of my brothers handed him the ball. He became serious. We became hushed, our playful banter silenced in anticipation. He slapped the ball, as if reacquainting himself with its feel, its breadth and weight. He patted and passed it several times between his hands. Everything he did was well above what we’d stumbled upon.

For one thing, he held the ball differently–chest high at first. In this routine, he first received the ball with his two hands and then stepped back on one heel, as if to set up his pattern of execution.

He began to step forward in a rhythm deeply embedded in his memory. As he did this, he transferred the ball over mainly to his left hand while still guiding it with the fingertips of his right hand as he took a couple of deep and wide strides forward. Finally he dropped his right hand by his right side as the left hand placed the ball as a target directly in front of him waist high. With a turn of his hips his right leg came up swiftly and accurately and struck through the ball and kept going until his leg was almost vertical, right in front of his face, his toes higher than his head at finish and pointing skyward. The ball exploded off his foot and rocketed into the air. It was like watching an Ottawa Rough Rider on our front lawn.

Collectively, we kids watched in amazement as the ball rose, in a perfect spiral, higher and higher and further and further. At its apex it seemed to float there for a moment, difficult to see if it was still going up or coming back down, sailing past our property, past the two Chenier houses, and landing several houses up on the street with a loud slam. No one dared try to catch it and when it hit the hard pavement it bounced a dozen or more feet into the air before ambling unpredictably down the street, bouncing to and fro before someone could scramble after it to retrieve it.

I stood there in awe. There were several oohs and aahs and other exclamations of wonder from the others. Dad said something about how he had been glad to quit playing because he feared kicking out some rushing player’s teeth in the process of getting his kick off during games. I understood his concern on the spot. What a humanitarian I thought–not thinking of that word specifically but you know what I mean. There was a higher moral purpose to this man beyond being able to kick the living daylights out of a ball for fun. I accepted that.

But, holy smokes, I thought to myself, did you see that?

With his final comment, he picked up his doffed uniform jacket off the lawn and went into the house for supper. Though, the memory of that kick follows me to this day. Dad was just that kind of guy.

P.S. want me to write a story for you like this one about something in your life? Contact me here.