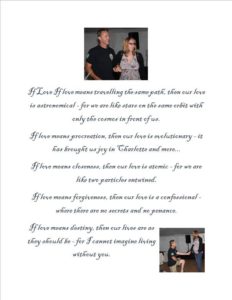 It was exactly 3 years ago today that I laid the atomic love on Melissa while she was nine months pregnant. We’ve been connected in atomic love for ten years, but that’s when I wrote her those words.
It was in front of 100 family members and friends during a post-double-nuptial reception clan BBQ for two of my brothers at one of Ottawa’s most scenic and historically significant sites.
This morning, I asked Mel about it and suggested we plan a wedding.
She answered saying it’s no longer the style to get married as people once did. Her sister has no plans to marry despite having a son with her man. Her other sister remains unmarried despite my advertising her virtues to promising suitors over Facebook and elsewhere (don’t worry, she won’t last. The good ones never do)..
I noticed while she said what she said this morning, she had also shared my poetic proposal on her wall earlier in the day. Thank goodness for social media. I may be a romantic… but I’m also just a man.
Of course, she accepted my proposal at the time because, well, really, who can refuse atomic love?
It’s the only kind I know after finally getting this whole love thing in middle age. As I like to say, find it early, find it late, but you must find love.
So why not atomic love? The kind that leaves you entwined with one another… as if it’s an impossibility of physics to be apart. This is my kind of love. This is the love I know with my Melissa.
Any of you who know me well also realize there is plenty of lust. In fact, I focus mostly on lust, while atomic love just happens.
So…what to do? Ha! Knowing what I do about women after all these years, I’ve got this.
As her knight in shining armour, as the man who chose her, who made her my woman those ten years ago, I must take her.
Even if it means I must double this buxom wench over my shoulder and carry her to an altar to stand before a priest, then it’s what I’ll do.
There I’ll declare my intention to continue to lust after her forever, and with physical fervor of and intensity of spirit, provide her with all I’ve got, with atomic love.
Little Howie is now eating solid food for the first time in his short life and putting on weight. He’s sleeping soundly after Mel insisted on a sleep study that revealed apnea so severe he was bumped to the top of the list for adenoids and tonsil removal. His Eustachian tubes must have been affected because within a week or so he picked up another fifty words. He can hear now. He’s a boy, a charmer, smart; his father’s son.
Charlotte is my delightful daughter, now five. She’s magic and I am hopelessly smitten… just as they warned me would happen. She teaches me something new every day.
They will be flower girl and ring bearer.
We sold our Cobourg house overlooking Lake Ontario in the early part of the year. Despite the spectacular view and wonderful neighbours, it no longer suited us. Missus said, sell, she wanted a big yard for her children, and for chickens. Seemed like a natural progression to me so we moved.
While she was in Toronto with the children attending to medical needs for our boy, I got her two hundred acres just south of Ottawa. It is twenty minutes from my aging father’s place. Not all of us get to be there for our parents in their later years. I’m feeling very grateful.
I am among clan and many friends, some of whom go back 40 years. Business is rebuilding nicely. Life is very good and getting better. I think the time is approaching when the missus can relax and make this official.
So, stay tuned, there’ll be a wedding in 2017.
True and Free!