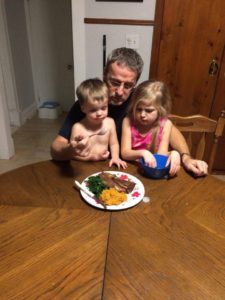 I remember my sister-in-law brought her co-worker, a Mexican national, to my house one day. While we chatted, he told me how his father came home everyday to his family back in his village. Tired, hungry, done with the day’s challenges, home was his father’s refuge.

Father would sit at the table while mother would feed the man of the house traditional Mexican food: tortilla, taco, enchilada, etc. While he ate, his children would take turns sitting on their father, so happy were they to see him. Mother would stand dutifully by and see to it he had his fill. If he wanted more, at his signal she would place extra food on his plate.

The man told me his father never objected to his children literally climbing all over him like they did. I think there were at least several of them. He just went about eating his meal, often sharing part of it with the kids. Father never refused one child his attention, acting as if this was how it was supposed to be. He wouldn’t flinch when one of them climbed over his shoulders, onto his head even, put a hand in his face, or hung off his back or neck while he ate.

When he was done, his mother would take away father’s plate and the children would stay to play and talk with their father.

This young man’s name happened to be Angel and what he told me has been my guide at meal-times since. He has no idea how easy it made things: To let go and just allow it, embracing the disorder to find connection underneath.

I’ll never forget that story. It’s now part my own…